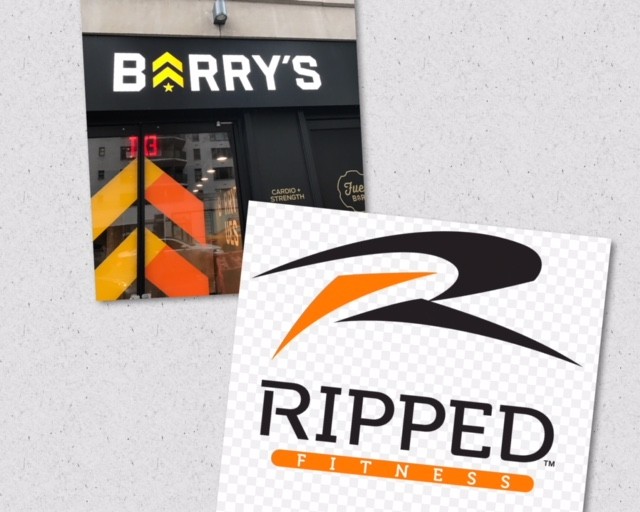 So as you all know, I like to work out. I have a whole category dedicated to the topic.

Today I received an email that sparked my idea for this post.  A dear friend of mine sent an email saying that a babysitter of hers would be an instructor at Barry’s Bootcamp (a male babysitter, she has boys). My first thought, was Whoa!! Is it legal to have a babysitter that is Barry’s-caliber??? If you have ever taken Barry’s, you know exactly what I mean! Exactly.

So I have taken it upon myself to take a class at Ripped and then a class at Barry’s (with dear friend’s babysitter teaching). No, not on the same day. Just 2 days in a row, which is actually almost just as bad. Anyway here are my findings……..as always, I leave it to you to make your own educated decision.

Day 1- Ripped. One location in NYC- 2ND Ave @74th street. And one in Rye, NY. Nice street level studio with Woodway treadmills. Lockers and restrooms with amenities, even individual little bottles of mouthwash, no showers. I guess if your breath smells good, it wont matter that your whole body stinks. Seems well cleaned and sanitized to my eye. Filtered water available, and at your first class, a reusable water bottle is provided at no charge. Class runs 50 minutes. Approx 11 min on floor or treadmill and then quick switch to the other. Mikey was the instructor and he was good, even though maybe he talked too much. I think they all do these days. Anyway, I liked his music, it included some 80’s gems that were definitely motivating. He had a little half pony and he reminded me of Tom Cruise’s character in the movie Magnolia, because he was trying to give a motivational pep talk of sorts.

Day 2- Barry’s Bootcamp. I went to the UES location on 2nd Ave and 64th st.  Six locations in NYC, and a lot more all over the country and globally. Typical Barry’s studio, not too different than the Ripped studio. Although definitely larger. Woodway treadmills here also, lockers and restrooms with shower facilities. There is also a smoothie bar here. I believe they used to have Malin and Goetz product, but the other day it was switched to Oribe. Michael P. Was the instructor here and definitely a solid class. Music was a mashup of sorts including some heavy rock. Got the job done.

Anyway, the bottom line is they are very similar!! The biggest difference for me is that Ripped is 50 minutes long and Barry’s is a full hour. So for some people those 10 min make a big difference. Also, at Ripped you choose your own base speed, so the instructor is only giving you cues when to add or take away speed, but never the actual speed. Again, your own preference here, at Barry’s the instructor will call out suggested speeds. Depending on the instructor, they can seem normal, and sometimes just downright crazy! Anyway I like both and think there is room in the world for both varieties. Try them for yourself, and lmk……

No comments made yet. Be the first to submit a comment

By accepting you will be accessing a service provided by a third-party external to https://530or630.com/